Public Health Nursing, Midwives and the Reduction of Maternal
and Infant Mortality in Mississippi in the First Half of the 20th
Century

Birth in the United States in the early twentieth century was a dangerous proposition. Maternal and infant mortalities placed the U.S. low on the scale in relation to other developed countries in the ranking it between 11th and 18th among principal world nations during the 1910s, with more than one in ten babies dying in their first year of life.1 The Children’s Bureau, the first U.S. federal agency devoted to the welfare of children, founded in 1912, made prevention of infant mortality its first priority. Birth and death registration became a requirement in most states around that time, including Mississippi. Up until then, estimates of mortality were not accurate and were based on voluntary reporting, leaving many rural and isolated communities with incomplete statistics. The registration area data, on which any statistics were based prior to that time, included primarily larger cities.

In the 1930s at least 50% of all births occurred at home, and midwives still attended approximately 30% of all births, with physicians and hospitals accommodating an increasing number.2 Over 80% of midwives still practicing in the U.S. in 1930 delivered babies in the southern states. One fourth of all babies and one half of Black babies in that region entered the world into the hands of the mostly Black lay midwives. This factor significantly influenced Mississippi public health efforts in the 1920s and 1930s. The lay midwives were a prime target for education through the State Health Department, and they became key players in the quest for better health in Mississippi.3

Mississippi at the time had the highest maternal and infant mortality rates in the nation.4 African-American rates greatly exceeded White rates.5 Early public health nurses in Mississippi (1916-1917) practiced in Hines, Washington and Adams counties, and by 1919 they practiced also in Lee, Bolivar and Coahoma counties. Their support came from the National Tuberculosis Association and the American Red Cross.6 After WW I, in addition to the placement of a state nurse in the Office of the Board of Health, the U.S. Public Health Service (USPS) sent Nurse Laurie Jean Reid to study the maternal and infant mortality in the state.

The USPHS study and other records showed that approximately 5,000 midwives practiced in the state (about double the number of physicians), and that the majority of births occurred in the home, supervised by midwives or physicians.7 The midwives, whose previous training was by apprenticeship and experience, became the educational target in the state’s attempt to reduce the significant mortality associated with childbirth. State Public Health Nurse Supervisor, Mary Osborne, along with Laurie Reid believed that the immediate elimination of the midwives was not feasible due to the small number of physicians and hospitals prepared to care for women in childbirth. Instead, in collaboration with the State Health Department they undertook the education and training of the midwives as a tactic to reduce infant and maternal mortality. The strategy launched the education and registration of the existing qualified midwives, rather than their extinction.8

Public Health Nurses increased in number over the decade from 21 in 1921, to 39 in 1931, and 141 by 1941. Sheppard-Towner funds from 1921-1929, along with Rosenwald funds permitted the increase in the nursing force and the addition of black nurses to the workforce.9 These nurses became the midwife educators and trainers, and they developed a cooperative relationship with the midwives that endured for more than 50 years. The eligibility of midwives for training and permits included: cleanliness (person, home and equipment), competent use of eye drops at birth to prevent ophthalmia neonatorum, reputation for a good work ethic, seeking help of a physician during difficult births, and for recording births.10 Nurses initially convened monthly local meetings with the midwives and inspected their bags, their cleanliness and assisted in providing silver nitrate eye drops for newborns.

Provision for safe and consistent care for mothers and newborns was a priority for Mississippi in the 1920s and 30s, and drew on private, state and national sources of funding. This focus resulted in a partnership between Public Health Nurses and lay midwives that not only improved maternal and infant mortality statistics during the years between 1921 and 1942, reducing maternal mortality by more than half, and the overall infant mortality by about 40%, but they preserved and fostered a unique professional role for African-American women in their communities.11 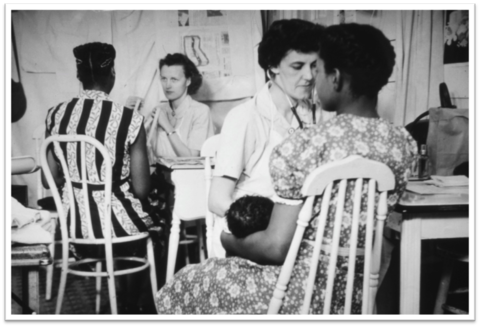 This letter, presumably sent to physicians in Gibson County, Tennessee, describes the onset of nursing services at delivery for residents of the county beginning October 21, 1937.

This document provides a table of the year to year infant and maternal mortality in Mississippi between 1930 and 1937. It includes total mortality as well as mortality by race.

Two pages including hand written sheet on preparation for delivery, and a typewritten document, Preparation for Delivery, with a handwritten direction to give to patient around the 7th month.