A series of lectures on malaria was given to the third, fourth, fifth and sixth grades in the schools. After a short lecture I asked each child to write a theme on malaria. It certainly was surprising, as well as interesting, to know how much the average child knew about malaria. Some wrote poems on the mosquito. Here is one written by a girl in the fourth grade:

It immediately becomes evident when reading the Benoist Collection that Public Health Nurses in Mississippi during the 1930s faced communicable diseases in their everyday practices. Like communities throughout the United States, communicable diseases threatened public health and contributed significantly to the escalating costs of providing care to needy populations in Mississippi and in the context of economic and political discord during the Depression Era.1

Unlike a specific disorder, communicable diseases include many illnesses caused by an infectious agent or their toxic products. These agents, transmitted to a susceptible host either directly or indirectly, cause illness. Whatever the etiology or mode of transmission, communicable disease containment required a variety of resources, strategies and treatments. Various healthcare providers, including nurses were needed to contain or prevent disease spread.2

Smallpox, diphtheria, typhoid, tuberculosis, and syphilis were major sources of morbidity and mortality in Mississippi during the 1930s. These communicable diseases along with numerous others drained populations of vitality and limited the abilities of children and adults to work and learn. Thus, the skill to identify and control communicable diseases became vital as Public Health Nurses fought to preserve the health of individual patients and to protect the community from exposure to disease.

The history of communicable diseases and public health in Mississippi began long before the 1930s and even before the United States became a sovereign nation.3 In the 1800s state legislatures throughout the America addressed the spread of disease from outside the states by allowing Commissioners of Navigation in the seaports to appoint port physicians to enforce quarantines. Legislatures addressed public health on a situation-by-situation basis for decades. However, the states' and the nation's experience with health management would be changed by the bloodiest war in our Nation’s history: the Civil War.4

Reconstruction ended in 1876, but the aftermath of the War and limited resources affected public health for years to come. This was especially true in the southern United States. For example, in Mississippi Public Health Nurses were not initially employed until 1915. Their employment occurred just prior to the onset of World War I and the Great Flu Pandemic of 1918.5 Preventive health care support, while enhanced in the 1920s with the Sheppard-Towner Act, was compromised after 1929 when those funds for nursing education, midwife supervision, and maternal and child care were discontinued and the Great Depression began.6 Thus, it is understandable why economic support and manpower for heath care suffered in the early twentieth century.

Fortunately in January of 1931, Mississippi became one of three states chosen by the Commonwealth Fund (a private American foundation started in 1918)7 for cooperation in a public health program to include medical and nursing education and nursing services. The Commonwealth Fund became a benefactor to Mississippi and its public health programs and also provided scholarships for Public Health Nursing education well into the 1940s.8 Health departments that employed nurses reaped the benefits from this funding. The Report of the Activities and Accomplishments of the Field Unit of the Mississippi Board of Health, 1931-1945 reported thirty-five full-time nursing positions budgeted. Nevertheless, with difficult economic times and the Great Depression looming over the Nation several counties in Mississippi were forced to discontinue their organized public health systems during the 1930s.9

In 1933, President Roosevelt initiated the New Deal to relieve the economic hardship of the county.10 Within the New Deal, The Social Security Act of 1935 provided funding to increase public health programs, particularly to extend services and improve health care for mothers and children in rural areas suffering from economic stress.11 The Mississippi State Board of Health secured funds in 1934 through the Children’s Bureau of the U.S. Department of Labor, providing funding for one state supervisory nurse, four district supervisory nurses, and eighty-two county nurses. The goal of this special project was to place at least one public health nursing position in each county.12

Concerns surrounding communicable diseases gained momentum during the Great Depression (1929-1939). Mississippi state and local health boards addressed improvement of sanitation, management of typhoid outbreaks, treatment and prevention of sexually transmitted infections such as syphilis, close monitoring of births and deaths, and the promotion of healthy motherhood and infancy. Health education (vital in prevention of communicable disease) became a larger part of the mission of the local health departments.13 Mississippi was one of the first southern states to recognize the importance of nursing services in industrial hygiene programs to prevent the spread of disease.14

Public health nursing in Mississippi proved its importance in the 1930s. Reports such as Excerpts From Public Health Nurses’ Narrative Reports, Mississippi State Board of Health, September 1938 (found in the Caroline Benoist Collection) made clear that Public Health Nursing provided by qualified graduate nurses was an asset to organized community services.

Mississippi significantly increased its number of Public Health Nurses from 1930 to 1939. In 1930 Mississippi claimed thirty-five full-time nursing positions. However, by 1939 there were 183 public health nurses employed to serve 1,644,167 Mississippians. Although many counties lacked full-time health departments and the patient load of nurses was overwhelming by today’s standards, the expansion within one decade represented a 400 percent increase in Public Health Nursing services in Mississippi.15

During the 1930s public health nurses initiated clinics, screened for diseases, taught preventive measures, and cared for patients in homes, schools, churches, and factories. They worked diligently with the help of governmental, philanthropic and local support in time of economic turmoil to improve the health and well-being of all Mississippians.

It is our hope at the University of Virginia Center for Nursing Inquiry that the Benoist Archives will be of interest and a value to your research. Caroline Benoist and the nurses who worked beside her are very much a part of American nursing history. We are most fortunate that Nurse Benoist kept a record and saved valuable documentation of her activities while providing much needed nursing care in Mississippi. Please contact the Center if you need assistance or have further questions regarding these documents. 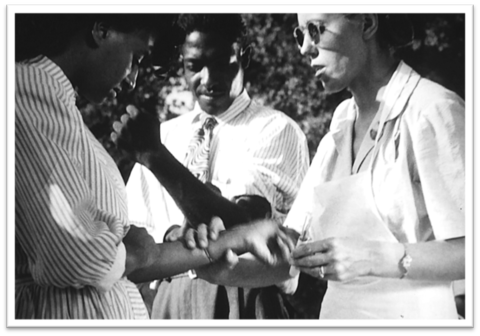 Metropolitan Life Insurance Company pamplet on the precautions surrounding the care of patients with communicable or contagious diseases.

Control of Communicable Diseases: Report of a Committee of the American Public Health Association
15-19

Control of Communicable Diseases: Report of a Committee of the American Public Health Association, 1935.

A 1924 Hygiea article highlighting the etiology and methods of prevention related to diphtheria.

The Mississippi State Board of Health 1935  Rules and Regulations Governing Communicable Diseases, signed and sealed in 1936 by Felix J. Underwood, MD.