Child Health in Mississippi: Working against the Odds

Mississippi, even before the 1930s, was among the poorest states in the nation. Dominated by agriculture rather than industry, the state’s economy was devastated when the Great Depression brought falling cotton and commodities prices and left large numbers tenant farmers, sharecroppers and their families out of work. Appalling maternal and infant mortality, high venereal disease and a scarcity of doctors and hospitals per capita along with “the smallest per capita expenditure for medical care of any state,” challenged health professionals, especially Felix Underwood, M.D., the Executive Director of Mississippi’s Board of Health.1 Caroline Benoist, RN entered this environment in 1936 as a Public Health Nurse, following her early career in surgical and private duty nursing. Nothing short of hard work, organization, and sufficient funding would suffice to meet the Public Health challenges of that time.

Child health was an index of the success of public health measures, and increasing public responsibility for child health became evident during the depression years.2 Even southern states like Mississippi, that spent far less on health than northern counterparts, made inroads that improved child health. Federal Sheppard Towner funding, which contributed to maternal child health (MCH) initiatives, expired in 1929, but the Social Security Act of 1935 authorized annual appropriations for MCH services of $3,800,000 for states, administered through the Children’s Bureau. By 1940, forty-eight states had maternal and child health services that benefitted from these funds.3 In addition, nurses became available to the Health Department through the Federal Emergency Relief Act, another New Deal initiative.

Yet disparities in health and disparities in investment in Black children versus White children were evident. For example, in the late 1930s, less than 20% of Mississippi’s educational dollars were spent on Black children, while over 80% were spent on White children. Some counties allocated no money for Black children’s education. Without private resources (like the Julius Rosenwald Foundation and Rockefeller dollars), Black children’ health and education might have fared even worse.4 As early as 1929, funding became available through this philanthropy, prioritizing the hiring of scarce, well-trained Black Public Health Nurses, and a focus on the health and education of Black families. Eliza Pillars,RN, hired in 1926 was the first Black Public Health Nurse in the State, and focused her practice on maternal child health.5

In Mississippi, in1930, twenty-five full time county health departments were already in place, and by 1932, public health nursing budgets had increased to accommodate 35 full time nurses in the state. But there were 82 counties to cover where malaria, hookworm, tuberculosis and pellagra were rampant. Nurses set up clinics in schoolhouses, empty storefronts, churches, or under shade trees on plantations in order to provide immunizations against smallpox, diphtheria and typhoid as well as case management for mothers, children and adults. Patient education was a priority – nurses taught good health habits, the importance of sanitary privies, nutrition, screened homes and baby beds. Much of this teaching was directed towards the well being of children, and the nurses made home visits to mothers, infants and children and those with communicable diseases. The schools were a central site of care and case finding.

By 1934, the State Health Department secured funds from the Children’s Bureau for one state supervisory nurse, four supervisors and eighty-two county nurses. The scarcity of qualified public health nurses hampered the goal of “one nurse for every county.” By the end of the 1930s, less than one-half of the counties achieved full time health units, but the Health Department built a foundation of care through funding from philanthropy, the Commonwealth Fund, federal programs and state funds, and employed 183 public health nurses.6

The success of child health programs and midwifery oversight, in which Public Health Nurses trained and supervised Black practicing lay midwives, could be documented in the changes in the maternal and infant mortality rates between the beginning and end of the decade. At the close of the decade, maternal mortality in Mississippi declined from 9.6 to 6.7 per 1,000 live births; and infant mortality from 68 to 54 per 1,000 live births.7 An increasing number of children werealso vaccinated against preventable diseases and the morbidity and mortality from these diseases dropped in areas covered by local health departments.8 Public Health Nurses like Caroline Benoist committed their time, talents and professional skills to improving the health of Mississippi’s children and families. Her collection provides a fascinating window into nursing practice in a southern state in the 1930s. 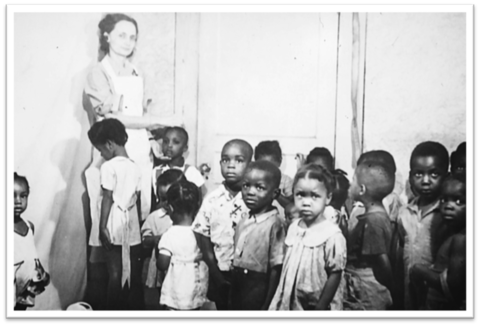 Report given to Mississippi State Nurses' Association, Nov. 9, 1937, by Mary B. Delas, RN.

This chart is a guide for the nurses in noting child progress. These are 'guiding instructions', similar to standing orders used today, and used to standardize nursing care.

Pamphlet issued by the Infant Welfare Society of Chicago which outlines instructions on the care of children (sleep, feeding, hygiene) from age two to age six. No date provided.

This collection of documents is a pamphlet given by nurses to new mothers.