District nursing or visiting nursing existed in many cities and towns throughout the United States around 1900. Most early visiting nurse services received funding from either private donations or a mixture of private donations and public funds. As the popularity of this nursing role grew, the responsibilities placed on the trained nurse increased to include maternal child health, communicable diseases (especially tuberculosis), school health, chronic disease care and care of the elderly. Nurses cared for families in their homes which included preventive and sick care covering a wide variety of conditions. Therefore, their knowledge had to be broad based in order to meet the challenges they faced.1

As early as 1881, Florence Nightingale described the higher level of training expected in the district nurse,

Nightingale astutely emphasized the autonomous nature of the public health nurse’s scope of practice. The increased autonomy of public health nursing practiced required a corresponding increase in the level of theoretical training and fieldwork required for competency in public health work.

In the early part of the twentieth century American nurses had three options for specialized training in public health nursing: elective coursework and fieldwork in the third year of a hospital training program, a post-graduate apprenticeship with a visiting nursing association, or post-graduate training in a university program. Each type of training program for public health nursing agreed that a balance of theoretical training and fieldwork were essential for the proper training of a public health nurse. In 1906, the Boston Instructive District Nursing Association offered a four month intensive course of public health work with district nurses under close supervision and daily debriefing with the superintendent of nursing supplemented by lectures. The post-graduate student received no salary only room, board, and car fare. In 1910, Teachers College at Columbia University established the first college public health nursing course supplemented by two months of practical work at the Henry Street Settlement. Settlement houses such as New York’s Henry Street and Chicago’s Hull House District accepted a select group of students for fieldwork prior to or after didactic training. University programs lasted eight months to one year and included courses in biology, applied bacteriology, social work, preventive medicine, sanitation, household economics, modern social problems, and public health legislation combined with two to three months of fieldwork.3

In 1912, a founding mission of the National Organization of Public Health Nursing (NOPHN) was the standardization of the training and practice for the public health nurse. The NOPHN described the requirements for preparation as a public health nurse: age twenty-five years, graduate registered nurse of a hospital training school of no less than 50 beds and two years of training including obstetrics, and training in visiting nurse work. The NOPHN endorsed schools of nursing that embodied the scope and standards established by the organization. By 1921 twenty-four universities, including Columbia, Ohio State, Johns Hopkins, Western Reserve University, and Simmons College, offered courses in public health nursing twenty of which were endorsed by the NOPHN. 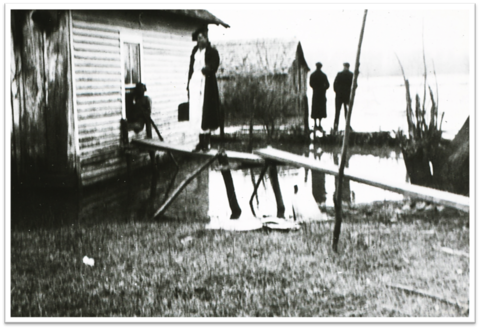 Conduct of Poliomyelitis Clinic in Jackson
15-21

This short paper, delivered at the APHA meeting in Kansas City, describes the elements of public health nursing from the perspective of the Executive Health Officer of the Mississippi State Board o

A 1924 Hygiea article highlighting the etiology and methods of prevention related to diphtheria.

Nurses' Narrative Reports: Excerpts from the Mississippi State Board of Health, 1938.
15-35-1